You’ve seen Grand Theft Auto on the news.  However, unbeknownst to those who only consume the media frenzy when a new installment comes out, these games aren’t just about blowing stuff up (although admittedly, those parts are super fun).  The US has changed quite a bit in the eight years since Grand Theft Auto IV came to a money-grubbing GameStop near you, but the portrayal of Bernie Crane, a gay man in GTA‘s fictional Liberty City, belies the shoot-’em-up tribute to toxic masculinity that most think the series is.  Throughout Bernie’s story, Rockstar Games shines a light on frequently ignored or misunderstood aspects of life that can make it tough to be a gay man in America.

Niko Bellic smuggles himself from Eastern Europe into the U.S. during the events of GTA IV looking for that “special someone,” aka the spineless dirtbag who betrayed him way back in the Yugoslav Wars.  At first he’s looking for ex-squadmate Florian who now resides in Liberty City, but he doesn’t find the cold backstabber he expected.  Florian Cravic, the aspiring pro wrestler is gone.  He’s transformed into Bernie Crane, an aerobics instructor desperately in love with another man.  He’s pretty much every stereotype about gay men rolled into one cardigan-rocking figure.  At first, we laugh: we came looking for vengeance against a hardcore soldier and instead found the most flamboyantly gay man possible, ripped straight from a throwaway joke from a 90s sitcom.  How is this guy a threat, again?

But as we unravel the mystery of this effeminate man, he quickly turns from an object of ridicule into one of sympathy.  Turns out, both he and Niko suffered the same betrayal in the war.  While life has been hard for Niko since, it’s been even more difficult for Bernie given his sexual orientation.  He thought he could come to the states, change his name, and be free from his past, but it turns out that this “progressive” country is no better than the last.  The homophobes here beat him up in the park and blackmail him just because he’s into other men.  The series of homophobic attacks creates a world in which homophobia is alive and well, even if it’s not a carbon copy of the one we’re in right now.  It’s true, people still can face ridicule and violence just for being gay [note: days after this post was originally published, the events in Orlando sadly reminded us of this grim fact], but these aren’t as common as the game portrays, and the game never addresses the damaging effects of the far more prevalent subtle homophobia.  Nevertheless, it sends a clear message that in Liberty City, same as in real life, homophobia is nowhere close to being solved.

Delving further into life for gay men in 21st century America, the game explores what makes a gay romantic pairing different from your average one-man, one-woman relationships.  Bernie’s boyfriend is Bryce Dawkins, the Deputy Mayor who has made a name for himself in politics on a “family values” platform (his words, not mine).  Thus, both have to make sure that word of their relationship never gets out, lest he run his career into the ground.  Even for non-celerity gay men, the closet casts an omnipresent shadow. Sure, heterosexuals sometimes have to hide their relationships, but these situations are the exceptions.  For gay partnerships, being unable to take a partner home to the parents is a much more common occurance.  And all that sneaking around can take a toll on one’s psyche, celebrity or not.  And of course, the nature of these issues keeps so many same-sex relationships out of view, meaning that many people lack understanding of exactly what makes such a relationship so hard to maintain in a heteronormative world. 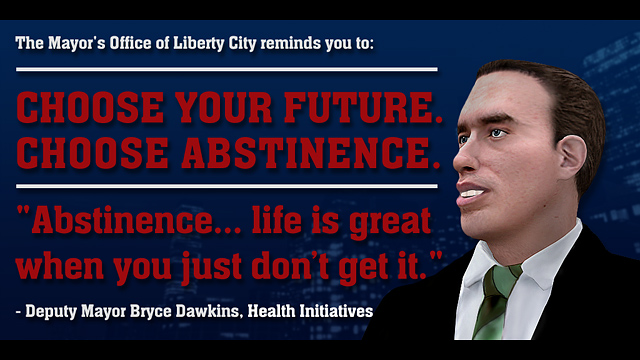 GTA IV exposes so effectively these underlying issues that gay men deal with precisely because it can put the player right in the thick of the problems.  We aren’t watching the action; we are the action.  We are Niko.  We accompany Bernie into this underworld and there’s no ambiguity: Bernie is our friend and the homophobes are our villains.  When we fight these bad guys in the hopes that they leave Bernie alone, we’re taken into a new, deeply homophobic world.  Though most of us knew, at some superficial level, that it existed, many of us never truly have had to experience it.  Through Niko, we see first-hand the severity of the conflicts in the lives of gay men.

Bernie’s story arc is approximately an hour-long segment of the thirty-hour main storyline in Grand Theft IV, and it’s not a perfect representation of gay men (and I’m sure a great portion of the mainstream audience failed to recognize any of these lessons that I’ve outlined) but for an industry in which homophobia is rampant, it’s better than nothing. Homophobia is a huge issue among the gaming community and its developers. Just log on to any online game and count the number of times you hear someone say “f*g” or “f*ggot;” you’ll probably be ready to hit the mute button less than halfway through your first game of Team Deathmatch.   But perhaps if we had more stories like Bernie’s, at least some of those “bro gamers” would begin to understand why life can be so hard for gay people, even in a so-called modern world.

View all posts by mindfulentertainment